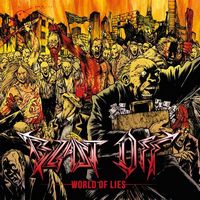 Spanish thrashers Blast-Off may know their way around only a few bands, but, by golly, they know them well. Their musical palette doesn’t stretch far beyond Kreator’s rip-roaring 1985-1990 period, and if our ears are keen enough, there’s small traces of Destruction and the very-cult Sabbat happening too. Then again, you don’t get the feeling this quartet is doing it just to show off their shiny high-tops or patch-laden jean jackets, for World of Lies, in its brief, but effective four songs, is executed about as well as it could have been.

D-beat and/or polka pounding is in long supply here, with the Spaniards getting down with some nimble, if not technical riff action on opener “Magnicide” and the stop-start “Blackout,” which has the potential to be rather raucous in the live setting because the call-out in the chorus. Some melodic pings creep in occasionally, although the band appears to be ready to pull back on such things at almost the drop of a hat. But then again, the band displays far more versatility in their arrangements – it’s not all Lombardo action then a silly breakdown. (This is what happens when a band is raised on German, not American thrash.)

Blast-Off have yet to do a proper full-length (World of Lies is their second EP), so it’s up in the air if they can maintain this sort of balance and agility across a full album. Such are the common obstacles for thrash bands in the modern era. Good ideas are generally in short supply, yet with four songs, Blast-Off do more than most bands can do with a legitimate LP.