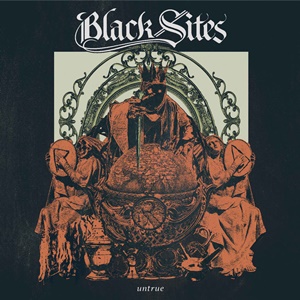 Containing members from the Midwest with experience in the studio and on stage for acts like Novembers Doom, Abigail Williams, High Spirits, and Glacier among others, Black Sites are a trio active since 2016 putting forth their take on traditional, old-school metal with progressive leanings. Untrue as the third album showcases eight tracks with an affinity for complimentary twin guitar action that has a retro/bluesy atmosphere channeled through 80’s/early 90’s metal textures, proper drum support featuring killer double kick/fill accents, and majestic melodies that pull you in to the corresponding verses and choruses.

Ethereal and haunting chord combinations from Mark Sugar and Ryan Bruchert draw from driving influences such as Thin Lizzy one moment, then Blue Oyster Cult, early Queensrÿche or Voivod the next. Check out the uplifting axe accents against crunchy, moving riffs for “Call It by Its Name” – allowing Mark’s emotive vocals and supplementary background support from Ryan to hold greater dynamic significance. The experienced, fluent abilities that drummer Garry Naples displays open up heavier rock and doom horizons – coming into play during a slower, mysterious effort such as “Echo of a Lie” where as a listener you seem uncertain about the intensity and circular nature of what takes place next. Locking into specific driving riffs and branching out along the progressive, classic metal lineage allows Black Sites wonderful space to incorporate influences from early Black Sabbath, Judas Priest, and others as well – “They Eat Their Young” maintaining a swinging groove throughout that those early purveyors would applaud. You can even get a bit of 70’s Rush in spots of “The Worst of Us” between the clean and distortion passages, another highlight effort due to the impassioned register from Mark Sugar vocally – combining bluesy, alternative, and southern/doom-like aspects.

You don’t usually hear classic heavy metal with progressive influences combined in a way like Untrue has – keeping one eye on the groove/hook ratio while also executing some fabulous musicianship and interplay track to track. Black Sites have all the tools to make an impact on a wide array of heavy music followers.