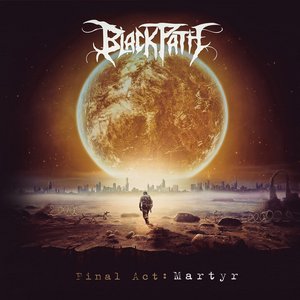 Sometimes death metal is at its most effective when it’s just straight shooting. Not caught up in putting too many bells and whistles into the mix, just punishing and aggressive. While Black Path has more nuance to it than simply that, it does seem to be designed with that notion in mind. The band’s first full-length effort does some heavy lifting, but has a melodic edge to keep it interesting.

The Greek act at times does seem to channel the Swedish ways, but not the old school one’s your brain may immediately jump to. Instead think more along the lines of Vomitory. Decisively heavy material, but with the melodic chops to elevate each track without compromising its goal of devastation. This becomes abundantly clear as “My Exile” opens up, with spiraling guitar melodies that quickly jump into chunky mid-tempo riffing and more frantic tempos as needed. Despite sticking to their guns in regards to what one can expect from this, some occasional treks into more melodic and technical waters helps to keep the album feeling more fresh as you approach it’s second half. But it’s all about groove and brutality at its core, with songs like “Definitely Obsessed” and “Blackened Requiem” being a visceral feast. The instrumentation is solid, with plenty of gorgeous solos and leads to spruce things up as well (see “The God Who Lied”), not to mention how strongly they tackle a lengthier track in the closer “March of Silence.”

With only an EP under their belt before Final Act: Martyr, it seems Black Path has the chops to hang with the bigger names in the genre. While one hopes they will further expand their dimensions with their next offering, the band have crafted an enjoyable piece of death metal that merges memorable writing with the heaviness one craves from the genre.