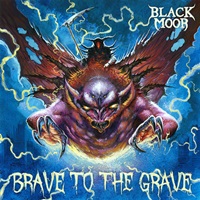 Unapologetic heavy metal fueled by copious amounts of beer, whiskey, and videogames, Halifax Nova Scotia’s Black Moor have been consistently active since their start a decade ago. Surviving near fatal car accidents and member shifts, the quartet now unleash a third full-length in Brave to the Grave. Brandishing bullet belts, denim, and leather, it’s safe to assume that a love for NWOBHM, thrash and traditional metal from the old school is prevalent throughout this 10 track effort – the type of music that fires up the flying V’s, hoisting affinity high to the sky as you exhort the choruses in unison with the band.

Evan Frizzle and vocalist Eric Hanlin handle six string slinging duties, firing off single and double rhythm/ lead duties like seasoned veterans, sure to elicit enthusiastic response as the charge throughout “Crossing the Rubicon” and the title track has similarities to Iron Maiden meets 3 Inches of Blood in an early Metallica bunker. When the band chooses to go a little more energetic in tempo, you feel like you are transporting back to the early 80’s on the spectacular harmony-laden “Black Wings Rise” – while there are also a couple of times such as “The Magician” and nine-minute closer “Beneath the Dunes” where epic arrangements give listeners more of their instrumental prowess, providing an emotionally deeper connection. Bassist Rob Nickerson has that Steve Harris pumping bottom end sound supplementing the axe attack, sure to induce his own adulation, cheers, and hand claps.

Speaking on the singing front, Eric possesses a mid-range clarity and semi-soulful rasp that resonates with their NWOBHM brethren – occasionally choosing to wail in higher reaches for important trailing chorus or verse sections. Personality can win many a fence-sitter over, especially when you have a dual bass/guitar tandem that throw down those air-worthy simulation parts to make “Garganthoclops” (what a metal title) another relevant standout.

Add in a proper awe-inspiring cover that most teens would love poster size (a flying demon/eagle in a scary pose) and it’s clear to hear on first and subsequent airings Black Moor’s appeal to the screaming hordes who live for traditional, melodic metal with occasional bursts of thrash and hard rock for flavoring. Considering the break-up of 3 Inches of Blood, Brave to the Grave could fill that missing niche for Canada’s healthy scene.