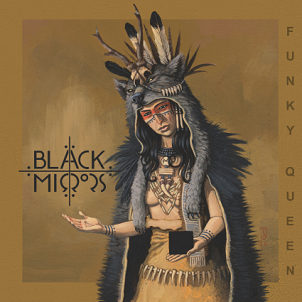 From an A&R standpoint, it’s fair to wonder why metal labels sign out-and-out rock bands but offer them up to heavier audiences. The experiment has been going on for several years now and still, not a single one of these bands has reached mass acceptance, in spite of their relative quality. Considering Austrian label Napalm has never shied away from signing bands out of their comfort zone (fun fact: they were once primarily a Goth label), the addition of Belgium’s Black Mirrors shouldn’t come as a surprise.

The band’s Funky Queen EP features four songs, including a cover of MC5’s oft-covered “Kick Out the Jams.” Fronted by the mighty pipes of Marcella Di Troia, Black Mirrors possess the necessary ’70s rock panache; they’re firmly entrenched in the tropes of psychedelia, just without the retrograde production. But to the band’s credit, they do whip out some seismic, big-auditorium sized hooks, especially on “The Mess,” which frankly, could accompany any number of beer commercials here in the US-of-A.

Alas, it all comes down to positioning and timing for Black Mirrors. Indeed they are a smidge late to the female-fronted, ’70s rock hangout, but in a scene in desperately need of electric personalities and standout talent, perhaps Di Troia is the next one to break through. Just don’t leave it up to the metal scene to determine that, okay?