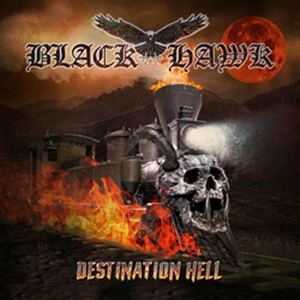 Purity in heavy metal always exists. You have musicians who believe certain lines should never be crossed in specific styles – and that’s where German traditional band Black Hawk come into play. Originally around during the 80’s and 90’s, they didn’t issue their first full-length until 2005 with Twentyfive. Making up for lost time though, the quartet arrive at the seventh studio album Destination Hell – and subscribes to a sound featuring throwback riffs, modest amounts of speed/power, and simplified choruses plus spirited lead breaks that appease the denim and leather brigade.

It’s safe to say these gentlemen study at the altars of Judas Priest, Saxon, Accept, and those offshoots when it comes to songwriting, execution, and generating riffs, melodies, and harmony aspects. Injecting lower keyboards or cleaner, bluesy guitars during “Bleeding Heart” provides a softer, ballad-like number to differentiate the normal street anthems or devil horns metal fare – and gives Wolfgang Tewes ample space for slower, emotive guitar passages to shine. Mixing up double bass-oriented speedier efforts like the opening double salvo of “Hate” and the title track with mid-tempo, hip-shaking numbers such as “Smoking Guns” or “Under Horizon” ensures versatility over the course of the ten songs, important even in this genre where its easy to get stuck in one specific template or gear. The main bone of contention for fulfillment or sustained enjoyment will be in the vocal melodies of Udo Bethke. Not exactly ascending to the Halford, Dickinson, or Dio class of power and range, he will tend to be memorable for being a bit warbly or driving home certain choruses to an ad nausea level of irritation – check out “Time” and “Under Horizon” for hammering things into the ground. The closer “Masters of Metal” name drops in the lyrics reference points to Saxon, AC/DC, Judas Priest, Motörhead, Manowar, Metallica, and Led Zeppelin among others – sure to be a crowd pleaser if Black Hawk choose to parade this on live stages near and far.

Kudos to these gentlemen for keeping their eyes on the metal prize since the 1980’s. Destination Hell isn’t going to be mistaken for anything less than a pure heavy metal template – you just wish the hooks, choruses, and vocal support would be a touch more original and stronger than sitting in the minor leagues compared to their contemporaries.