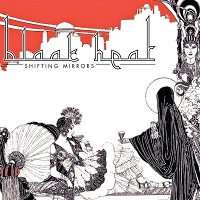 Originally named Blaak Heat Shujaa, Parisian psychedelic rockers Blaak Heat (it doesn’t sound as cool with the shortened name, guys), made the risky decision to move their operations from Paris to New York to Los Angeles in 2012. While it’s unfortunate no cameras were around to capture the band’s voyage for reality TV, the fact Blaak Heat are now firmly embedded in the psych rock scene says enough about their capabilities. Shifting Mirrors, the band’s third album, benefits from a Matt Hyde (Mastodon, Slayer) production job, and, a cohesive batch of influences that create a whirling, if not complex sound.

Doused with a distinct Middle Eastern and folk flavor, Shifting Mirrors is emblematic of how far the general,’70s-inspired rock template can go. The buzzing, but obviously stripped guitar tone opens the door for said Middle Eastern influences, which happen upon numbers like “The Peace Within” and the bobbing “Ballad of Zeta Brown,” which goes from balls-out jamming, to Spaghetti Western territory. Such leaps across the sonic spectrum are common here; desert rock makes an appearance on “The Approach to Al Mu-tasim,” and flat-out heavy jammers “Sword of Hakim” and “Black Hawk” are quality endcaps to the litany of flavors on hand.

With so much flying around, the vocals of Thomas Bellier occasionally get lost in the shuffle, which is somewhat unfortunate given his every-man timbre and approach. But he’s probably not what will get people turned onto his band. It’s the chance-taking, the peppy, poppy runs at jamming, and, of course, the imaginative quality of Shifting Mirrors that scores Blaak Heat as a progressive, free-thinking bunch of rockers with no limits, evidently.