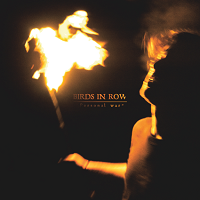 Post-hardcore that flails around like this could be called “panicky,” or “urgent.” There’s a concerted sense of desperation to what French trio Birds in Row are doing, like, “There’s X amount of time to get this song out the door. Better make it quick.” Something like that. However, with such brevity comes the seven songs that comprise the band’s forceful Personal War EP, a devilish blend of furious punk and the whip-churning of classic Snapcase.

In such short, compact arrangements, Birds in Row cover a lot of ground. On “Worried” specifically, the Frenchman drop out from rangy, emotive ‘core, to a calm, reflective portion that creates a marvelous flood of dynamics heading into the ensuing number, “Snakes,” which serves as Personal War’s most frenetic number. Reckless blasting and quasi-melodic chord movements shape a song that is as every bit as breakneck as post-hardcore can get with becoming full-on metal. (Surely Birds in Row would shudder to think!) But it’s another in a quick line of moments that demonstrate the song arrangement wherewithal the band has, all without overloading their compositions.

At seven songs, one could make the argument Personal War is a full-length. (Industry standards vary.) However, considering how quick this thing wraps up its work, it’s clearly one of those rapid jabbers, with Birds in Row flaunting and demonstrating how effective this brand of post-hardcore can be when it operates without pretense.