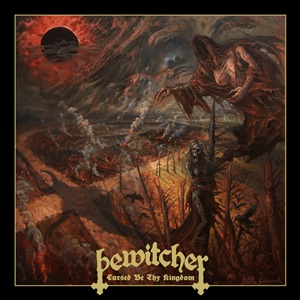 Making a pact with the devil in the metal realm can pay dividends – such is the case with Oregon act Bewitcher. Forming in 2013 originally as a duo and expanding to a three-piece, they’ve released two full-lengths, touring hard across North America and Europe with acts like Visigoth, Savage Master, and Holy Grail. Arriving at the key third record for Curse Be Thy Kingdom, all hands appear to be on deck spitting out raw thunder of the blackened heavy metal kind – sure to bang heads, spit fire, and cause commotion through the hordes that will take in these ten tracks.

There’s a sense that these musicians summoned the best of their classic metal influences – injected a bit of that raw punk and blackened dirtiness – and an outpouring of thick hooks and searing melodies come forth without losing any underground integrity. You can easily hear the Iron Maiden and Twisted Sister-like catchiness for specific riffs and runs during “Satanic Magick Attack” one moment, then the speed afterburners chug at early Metallica meets Venom tempos for the follow-up “Electric Phantoms”. Listeners will delight at specific phrases like ‘ambassadors of Hades’ or ‘fire meets fire until all is burned’ – the Unholy Weaver of Shadows & Incantations pulling double duty with sick guitar maneuvers and edge, raspy vocals that channel the darkness coming to a metal light. Using everything at their disposal to convey accuracy for the genre, favorites will change by the moment – after a few passes, the highway ready guitar bombs and double kick proclivity during “The Widow’s Blade” and Mercyful Fate-esque mystique against some uplifting chord combinations for the appropriately named “Mystifier (White Night City)”. Wrapped up in some engaging cover art by Paolo Girardi, it’s easy to understand how Bewitcher have been rising up the ranks due to their obvious songwriting talent and execution abilities – keeping the arrangements lean, mean, and exciting.

Curse Be Thy Kingdom should make quite a stir for those who live for classic heavy metal with that underground, blackened ambiance.