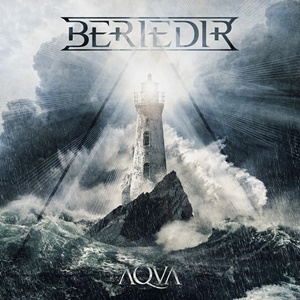 Named after the Sindarin word for ‘guardians’, Italian act Beriedir have been together since 2015, releasing their demo debut The Line the same year and three years later, their first full-length album for The Path Beyond the Moon. After an interim EP in 2020 Lullabies Beyond the Moon with acoustic rearrangements of songs from the first album, we arrive at the proper second studio record with AQVA. Dealing with stories of water in various forms from the manifestation of it through rivers, storms, or human tears, the band deliver material in a fine fusion of melodic power metal with progressive, melancholy, and death accents.

These musicians possess adept fluctuation between the various styles employed on all spectrums musically and vocally. Sometimes allowing the keyboards to captivate in a circular hook mannerism around the twin guitar attack a la Sonata Arctica or Dark Tranquillity as “The Dove and The Serpent” easily illustrates, with classical instrumental-like touches sprinkled along with vocal melodies that can be more gothic or post-alternative in texture. Heads down synchronization in the mold of Dream Theater or Vision Divine along with a potent bass mainframe makes “The Angel in the Lighthouse” another standout, the diversity from smoother verses to harmony-laden background vocal support during other segments keeps ears abuzz. As a vocalist and keyboardist Stefano Nusperli has a vibrant, ethereal presence – often choosing tones befitting a group like Styx or Kansas with his solo choices, while his singing range is more aligned to Katatonia versus a natural power/progressive belter. Check out his work during the straightforward “Of Dew and Frost” or spacious, adventurous opener “At Candle Light” and you’ll understand that his abilities put Beriedir in unique air compared to most of the Italian brigade. Intertwining death-like screams penetrates darker scenery against the normal ethereal clean vocals for “Arkangelos” – fueled with strong guitar rhythms and a slower, djent-like instrumental sequence over the course of its almost seven-minute timeframe. Properly seeking out Domination Studio/ Simone Mularoni for mixing/mastering ensures the record has that force and balance necessary to take in these tracks again and again.

Considering this scribe’s first exposure to the group, Beriedir has a solid understanding of these diverse elements they put into their melodic power/progressive metal base, and somehow make it work without overcomplicating things. Those who love the Italian flair for metal along with a bit of melodic death and melancholy atmosphere will be in for a treat here.