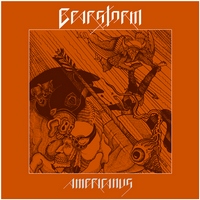 Originally recorded in 2013, Americanus is a re-recorded version of what the band refer to as “blackened southern deathprog.” An interesting description, and the name Bearstorm itself is a pretty cool band title, so it goes without say that the release required some investigating. Turns out, the band’s self-description is pretty dead-on.

It may be a little intimidating to push yourself into Americanus. The first track (“Glacial Relic/Riparian Forest”) itself spreads itself past the 11-minute mark and serves as a daunting but good introduction to what you’ll hear on the remainder of the album. The two biggest forces that battle eachother out during Americanus are that of black metal and prog. There’s a plethora of others (including southern rock, sludge, stoner, death, and more), but the underlying black metal tone, some of which comes from the blackened rasps, pushes forward with sometimes dizzying guitar lines and off the beaten path riffs that give the band a unique flavor. “De Soto” continues this movement of left hand turns with a southern folky outro consisting of banjo and strings. “Little Portals to the Greater Sadness” features some spiraling riffs that are more rooted in ‘70s progressive rock more than anything else. It’s this trippy attention to details that will keep you at attention for the length of the disc.

While some may tire of the curveballs around each corner, it’s also commendable to see a young band adamantly trying to develop their own flavor and sound. Far too many bands are willing to ape the next best thing, so kudos to Bearstorm for their innovation. Some of it may require a little bit of smoothing around the edges, but it’s a great start that they’ll no doubt be perfecting as the years pass by.