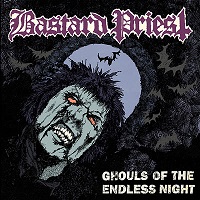 Amazing the mileage bands have gotten out of Left Hand Path, Like An Ever Flowing Stream, and Mental Funeral. These three albums have been picked at the bone until nothing is left (save for a rotting corpse, naturally), yet there are still bands finding new ways to kept the specter of early 90’s Stockholm death metal alive. The two-man duo of Matt Mendoza and Inventor otherwise known as Bastard Priest are doing that, and on their second album,Ghouls of the Endless Night, their undying affinity for crude and ugly death metal serves no other purpose to remind us how killer the aforementioned trio of albums are.

Fittingly, production was handled by former Dismember drummer Fred Estby, soGhouls of the Endless Night sounds appropriately dingy, propped up by a chainsaw-like guitar tone that is a core element of this style. The songs themselves are relatively effectively, employing scattered leads and speed runs (“Enter Eternal Nightmare”) manic thrash (“Sacrilegious Ground”), and doomy passages (“Enormous Thunder of the End”), all wrapped up into a compact package of vintage, yet totally played-out retro death metal.

Sure to find a home alongside current throwback mongers Death Breath, and Mr. Death, Bastard Priest respectfully pays homage to a sound that at one time, was the lifeblood of Scandinavian death metal. Goes to show influential Sweden as a country really is…