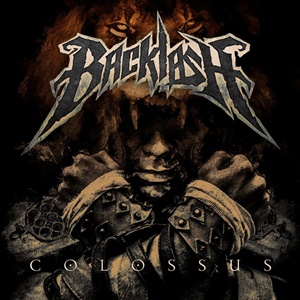 Thanks to specific social media algorithms we gain the chance to discover new bands like Illinois’ Backlash. Active since 2014, they’ve released a demo Cutting Teeth in 2018, setting the stage for this debut full-length Colossus. The quartet lean heavily on a thrash metal platform, taking influences from both the Bay Area and East Coast scenes while also considering more melodic aspects to these songs – especially in the vocal perspective which allows for plenty of memorable moments front to back.

The hard charging rhythms and equally punishing rhythm section work captivate immediately on the opening cut “Sleight of Hand” – quick to the chase for strong mid-tempo transitions and engaging guitar buildups with equal wah-wah effect enhancement, the swaying triplets during the instrumental sections crushing. Veering into NWOBHM-like movements through specific cultural/harmony licks for “God of Destruction”, its these extra nuances that separate Backlash from the typical throwback thrash act – as much as they love Death Angel, Metallica, and Forbidden, you can also hear affinities for Iron Maiden, Judas Priest, and Angel Witch. Atmosphere and dynamics come into focus for “Last Chance” – the slower clean guitar and subtle cymbal work submitting to a heavier, slow marching arrangement that conveys sophistication, progressive headbanging riffs that allow rhythm guitarist Ryan Sorensen a chance to belt out some higher-octane melodies (think Russ Andersen meets Marc Osegueda). The production and tones for Colossus are thick and robust – allowing the listener to pick up every little characteristic of the guitars, bass, drums, and vocals as a launching pad for what to expect when seeing the band live. The final track “Lenity” contains some entertaining d-beat/ gear shifting tempo maneuvers from drummer Shawn M. Johnson as well as a mix of divebomb tricks and bluesy/shred break action that serves as a fitting conclusion to this 45-minute outing.

At some points on the record you want Backlash to break loose a bit more from specific patterns that could be considered cliché to some thrash mavens – but overall Colossus succeeds because of its willingness to be more than just what we’ve come to know and love from the first (and second) wave of the Bay Area scene .