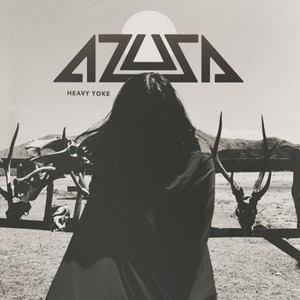 As far as supergroup-type events go, you’d be hard-pressed not to have heard some of the rumblings of Azusa, which features two members of Extol (Christer Espevoll and David Husvik), along with Dillinger Escape Plan’s Liam Wilson and Sea + Air’s Eleni Zafiriadou on vocals. Given the status of members involved, it’s an ambitious project (though it may owe more to Extol and Dillinger than some may want to acknowledge) that holds plenty of promise for the future.

Heavy Yoke is admittedly all over the place, which shouldn’t be a shock for anyone entering into the release. It was touted as a eclectic combination of everything from hardcore, rock, punk, thrash, and death metal (and more) and it does deliver in full on this premise. The progressive end of things keeps it constantly firing and changing things even within a single track – which includes all parts of the experience, from the rhythm section to the riffs to even the vocals (despite the heavy star power, most are going to come out of this raving more about Zafiriadou than the rest with her enigmatic performance). A musical chameleon for sure, the transitions may not always hit in a non-jarring way but there’s no denying the feeling of a track that ping-pongs from a hardcore presence, to a more ethereal chorus or floaty post-rock, hit an intricate yet approachable lead, and jump into a bit of thrash. It will keep you on your toes in anticipation of what is going to come next at all times. It will also take some attention to detail on the listener end in order to really appreciate the level of intricacy that the band is putting forth.

Azusa attempt to bring in a number of different musical landscapes together and succeed for the most part. Some of the transitioning could be fleshed out and smoothed, but that’s about the only detail keeping this latest ‘supergroup’ from launching completely through the stratosphere. Even as is, Heavy Yoke is a release that many are going to praise its virtues and does provide plenty of excitement for the modern/progressive metal fan.