AxMinister – The Crucible of Sin (Self-Released) 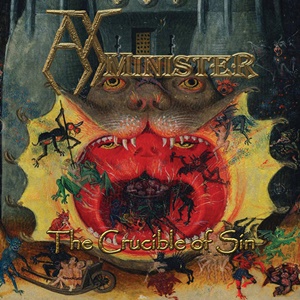 Embracing a theatrical thrash metal concept through medieval characterization, stage names like Bas Von Bismark (drums), Liam Maguire (guitar) and Nicholas Klaus (bass/vocals), and human sacrifices /blood pours for visual effect, AxMinister since 1999 portray a larger than life mentality to their audience. Continually developing their sound through a series of demos, EP’s, and singles, The Crucible of Sin is their latest effort. A five-song journey into a sound that doesn’t typify the 80’s start of the movement, but more of the early to mid-90’s period with the occasional traditional nods to keep things more straightforward and down to earth.

Often setting the landscape with various soundbites (a little moan here, dialogue there), the trio latch onto an immediate riff gallop, embellish things with the proper rhythm section groove components, and keep the choruses on point and sharp to encourage that gang-like enthusiasm. There’s nothing fancy about the approach, and you can tell a lot of their outlook meshes tried and true artists like Megadeth and Metallica during their commercial early 90’s peaks, along with a modest helping of 80’s true metal. The stair-step cultural guitar to snare combinations for “The Trials of Hercules” brings out the Manowar fan in us all – while the speedy double kick locomotive aspects to closer “Sanctus Equitus Mortis” surely keep the ears pinned for a closer.

Nicholas as a singer has more of a mid-range bellow, not necessarily the heaviest singer in the thrash genre but more in line with say a goth-like Pete Steele meets Alice Cooper presence. Because of this, sometimes the whiny nature to specific cuts (most evident during the chorus of “Prey”) can be a turn off to an otherwise catchy effort – and may be something that the band reigns in for future recordings. It’s clear that you have a solid set of musicians and keen songwriting abilities – so if you want something a bit more dramatic and adventurous in your thrash airings, AxMinister could be that difference maker for you.