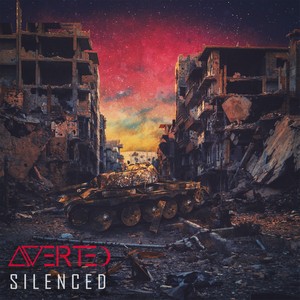 Popping from out of nowhere, the UK’s Averted dropped their first EP Silenced in the first half of 2020. An intriguing blend of modern metal with some prog/tech aspects to it, they have already caught some new ears as Wormholedeath was quick to sign them and give this initial offering a re-release for a wider audience. For good reason, as Silenced captures quite a bit of what makes this style tick and brings in some fresh directions.

There’s a lot to really absorb upon checking out Averted. They carry that groove-heavy approach of more djent-y acts as well as inject their music with some intricate proggy instrumentation at varied points. Add to that some immediate hooks that vocalist Syhem Angel brings to the table, as well as soaring guitar melodies and solos, and there’s quite a bit to dissect. The first things that will sink in are inevitably the driving grooves of the riffs and Angel’s beautifully contrasting vocals. But she’s also given the opportunity to roar when the song demands it, which gives songs like “The Curse” and “Silenced” some extra heaviness as the grooves roll out. Thankfully the band avoids the usual sing/scream patterns and opts for more effective placements for some greater striking contrasts – particularly with her cleans against some heavy moments. But as one continues to listen to Silenced, you can reach further into it and focus on the progressive elements, which begin bubbling to the surface with first track “The Plea,” with playful guitar flourishes that catch your ear more with each listen. The polyrhythms also catch the ear as well, even in more melodic sections such as closer “Absolution” and give these moments some more depth.

Silenced is a fantastic debut from a band that carries quite a large amount of potential with them. For their first offering, Averted conjure up a sound that is full of instant gratification with hooks galore, but ultimately win you over with the more intricate parts of their sound that start to further bloom with additional listens. An easy recommendation for those seeking modern metal that balances melody and heaviness well.