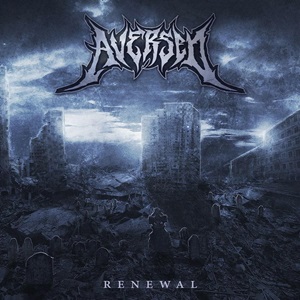 Ever since witnessing this Boston-based melodic death metal band live last year opening for Armageddon, anticipation increased for new studio material from Aversed. Expanding to a quintet through the addition of vocalist Haydee Irizarry in the interim, they’ve been performing as much as possible in and around New England, shoring up these latest batch of songs that appear on Renewal. Good things come to those willing to wait, as we have a seasoned set of tracks bristling with all the right dynamic nuances and cross-pollination moves to gain broader appeal while not sacrificing artistic integrity.

After a serene intro the thunderous jackhammer riffing and deep growls of Haydee set opener “Prison of Existence” on an adventurous course, ping-ponging between Arch Enemy-ish power sections with plenty of melodic hooks and heaviness plus occasional twisted musical interludes that give off a progressive, almost Revocation-ish vibe. Throughout the five songs guitarist Sungwoo Jeong and his axe compatriot Alden Marchand unfurl a series of jaw dropping lead breaks, integral to the Aversed outlook of maintaining proper cohesion for the arrangement at hand (in other words, these aren’t mere shred exercises). Even bassist Martin Epstein steps up to the plate and throws in a fluid bass lead during closer “Aversion” from 5:10-5:24 that will appease people into Steve Harris, Steve DiGiorgio, and the late great Cliff Burton. Mid-tempo In Flames meets Nevermore comes to mind on the very catchy title track, another stunner for its intuitive guitar hooks, proper use of a breakdown as it still maintains riff interest, and Haydee’s shifting powerhouse clean singing against her equally vicious growling abilities (think of Alissa of Arch Enemy meets Adrienne Cowan of Seven Spires/ Light & Shade).

There isn’t a bad cut out of the five on display – a key difference maker though is “Sorrowful Eyes”. Containing poignant lyrics regarding personal pain and self-care/recovery plus dual clean/screaming tradeoffs and harmonies between Sungwoo and Haydee, the flow of riffs and catchiness takes me to a place where Death Angel has gone with “Lost” off The Evil Divide. My headspace brings me to “Unsung” from Helmet for one of the main guitar passages, while other parts careen back into Clayman-period In Flames circa the early 2000’s. Content to mix things up between melodic death, thrash, power, and even extreme metal, this half-hour recording proves Aversed are ready for the big leagues in terms of a stronger, wider following. The band has all the requisite tools, talent, personnel and live tenacity to ascend the metal ranks – get in on them from the ground floor, as this is supreme material for all into European-oriented melodic death metal with American aggression and a surprise here and there.