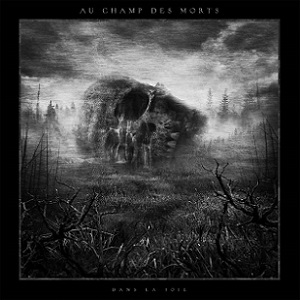 Without having to engage in another spiel about French black metal and its various ins-and-outs, Au Champ des Morts cast a decidedly mournful, if not downcast spell on its country’s extreme metal landscape. Read: They’re not a cut off the weirdness chopping block. Founded in 2014, the band’s 2016 Le jour se lève EP was merely a small indicator of the pleasantries (for lack of a better term) found on their debut full-length, the expansive, gem-laden Dans la joie.

Fundamentally, sure, Au Champ des Morts are a black metal band, although the splashes of atmosphere suggest the Frenchmen are operating from a different playbook than their peers. Opener “Nos décombres” is front and center on this, beginning with gentle guitar strumming, then merging into the lane of mid-paced, grind-you-down with swirling melodies BM. The topper is a smartly-placed guitar solo that happens near the song’s conclusion, an aching, near-bluesy piece that accompanies “Nos décombres” perfectly.

Jaunts such as “Après le carnage” or the melody-dominated “Contempler l’abîme” finds Au Champ des Morts fully capable of sidestepping many of the regular pitfalls of atmospheric black metal, notably pacing and diversity. The various crests and diversions thrown throughout the running order (the guitar solo trade-off that beckons on “La fin du monde” is of immense value) make Dans la joie a sterling debut. And yes, French black metal will forever thrive because of its variety and artfulness. The scene just found itself a new standard-bearer.