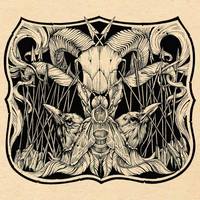 The fourth album from Switzerland’s Attack Vertical is pretty unabashed about what it is. Of course, deathcore is the name of the game here, and Attack Vertical hangs with some of the genre clichés. But one thing we can also take with a grain of salt is that the European versions of this particular genre usually do it a bit better (read: more metal than core) than their American counterparts. The Great Waste is no exception to this notion.

You’ll hear a number of breakdowns as you blast through The Great Waste. Be it as they may, most of the time there is a purpose behind them, and they integrate well into the mix (read: there are no breakdowns simply for the sake of having one). If you are okay with that, we can get on with the rest of the music, which does give Attack Vertical a bit of their own identity. One piece that tends to stand out are some of the more somber and almost melancholic guitar lines (see “End of Life Demanded”) that do a pretty good job of adding some spice and variety to the otherwise more frantic, The Black Dahlia Murder-inspired riffing that tends to plow its way through most of the songs. The melodies give Attack Vertical a more immediate sense of urgency, and the lack of cut and paste songwriting make the band a bit stronger than what is usually heard in the genre.

While at points, it sounds slightly too much like The Black Dahlia Murder, there’s some promise behind the riffing style of Attack Vertical. Having been in the game for 15 years, it’s safe to say they aren’t playing to any trends or looking to get famous quick. So it’s no surprise that The Great Waste is more pleasant to hear than most deathcore that seems to be reaching for the flavor of the month.