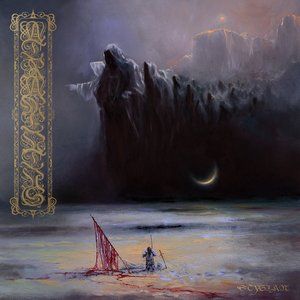 The Guardian of Atros Kairn is a man with a mission. He braved the perilous journey to the summit of Mt. Aageian to obtain the Atra Eas, the mythical sword of the sun goddess Heeos. He fulfilled his quest after several encounters with abominations and spectral manifestations on his way to the top, only to herald the death of the planet and doomed every living being to an icy grave as the sun goddess gasped her last breath with the theft of her very life force.

Such is the fully fleshed-out lore of Atramentus’ eight-year-in-the-making debut record Stygian. Not for a lack of trying though, as mastermind Phil Tougas bided his time to build on the lore and the music of Stygian, and it took him as long as the album needed to become complete, a funeral doom album whose heavily morose concept is equally matched by the sprawling, desolate music within.

“Stygian I” is the beginning of the end, the bells tolling as if to warn the Guardian not to be deceived by lesser gods Carcophanex and Sharos in plunging the world into eternal cold just to satisfy their greed. Every drum hit a march to death, the first track offers synths doubling as blizzards and somnolent guitars offering no light at all. Terrifying vocals by Tougas (also of Lovecraftian death metal gods Chthe’list,) envelop the mood as he channels the despair he felt in real life as he walked through several hours in a blinding snowstorm, which was the impetus for Atramentus’ genesis.

The haunting atmosphere of Stygian is credited largely to keyboardist François Bilodeau, as he manifests the encompassing hopelessness through orchestral synths. As the Guardian sleeps in “Stygian II”, Bilodeau owns the stage, excellently conjuring images of a barren, frosted landscape with his command of ambience. On “Stygian III”, the band raises everything up to 11. Frostbite-inducing guitar solos from Tougas and Claude Leduc, as well as rumbling low end vibrations from Antoine Dagneult and drummer Xavier Berthiaume lift the final track up to the stratopshere. With Stygian, Atramentus has given us the undisputed funeral doom metal record of 2020. Sorry Bell Witch, but your throne has been usurped.