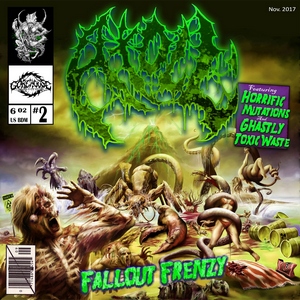 Sometimes one needs to simply drop everything and just slam. When done well, there’s a visceral energy that comes from the pulsating grooves and utter devotion to brutality. Atoll return with their second effort in Fallout Frenzy, and it fills all of the necessary requirements for such an event. Plus, the comic-inspired cover artwork is a nice spin on the usual uber-gory material the genre is known for.

Guttural vocals and bludgeoning riffs are the necessary components and you’ll find them in spades on Fallout Frenzy. You’ll also find some inspired sickening/humorous song titles (“Battlestar Gonorrhea” and “Full Gruntal Nudity” for starters) and a few samples (the album opens with the most/only metal moment from Independence Day). But in all honesty, slam albums like this pop up all the time – and due to levels of absurdity, are justly left to the ‘die-hards’ only. Fallout Frenzy manages to craft a slam album that, while safely falling in the confines of the genre, never overdoes things to that point. Odd to call an album like this ‘tasteful,’ but the songwriting is always consistent and engaging. No over the top blasting and beyond ridiculous vocals – just solid riffing, balanced drumming, and a diverse extreme vocal performance. There’s even some melody to it at times, beyond the slamming groove. “Forced Xenotransplantation” has a keen melodic sense behind the brutality, and those moments in turn add to the band’s delivery. You’ll also find some melodic leadwork, as in “Global Wryming,” which will give the listener a few seconds to breathe before the next monster slam.

Atoll don’t really go outside the box, but they perform like a well-oiled machine inside it. Fallout Frenzy is fun and catchy for the style, understanding the pitfalls of slam and doing a great job of avoiding them. It’s not going to change your mind if you don’t favor brutal death metal, but those who do will rightly be all over this one.