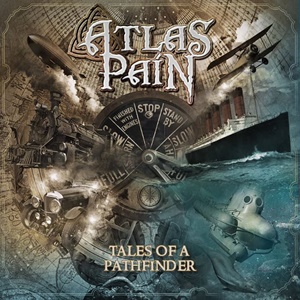 Establishing a precedence for epic folk-oriented metal with extreme nuances on their What the Oak Left debut from 2017, it’s evident when looking at the full presentation of Atlas Pain that we are dealing with a band aiming for a specific niche in a rather large sea of artists. The follow-up album Tales of a Pathfinder takes on the concept of an epic steampunk fairy tale set in London circa 1899 – and the journey around the globe to discover a brand-new world rising against the oppression of machines and steam for a long period. The stage clothes and makeup adhere to this throwback philosophy, so let’s see (and hear) what Atlas Pain have in store for us through this ten-track, 50-minute plus opus.

There are eight songs in the main – the intro “The Coldest Year” more a setup for the storyline as it has a circus performer-like narration as the music hits, while the closing “The First Sight of a Blind Man” is a short two-minute and change arrangement featuring sparse piano parts and a calm choir for dynamic supplementation. The folk/melodic death edge see-saw appears right away on “The Moving Empire” – dual scream/growl vocals and an equal level of commitment to mead hall-choruses and steady mid-tempo riffing makes you think that the band wish to gallop, thrust and parry between Children of Bodom, Finntroll, and Ensiferum. Midway through “The Great Run” becomes a catchy anthem – the hooks and melodies very much in line with uplifting power metal, the keyboard parts aligning with the melodies even as the vocals again navigate semi-growls, battery acid screams, and multi-part choir efforts. The sweet spot for the band is riding those Pagan/folk passages with electric guitars and keyboards working in tandem – check out “Kia Kaha” and “Hagakure’s Way” for some exhilarating harmonization between guitarist/keyboardist Samuele Faulisi and guitarist Fabrizio Tartarini – the latter containing some emotional/cultural building blocks layered together for increased dynamic impact.

Not everything of course works – some of the accented/narrative sections could have been swapped out for other guests or musicians with stronger voices – but those minor miscues do not severely detract from the overall output. The 11:23 epic “Homeland” is a feast for all senses – the calm waves, the twin guitar harmonies, majestic orchestration, and progressive-laden instrumental section taking on an Avantasia sheen against the normal folk/extreme textures. Tales of a Pathfinder finds Atlas Pain striding comfortably in the blend of styles – putting forth an interesting concept and serving up enough diversity and excitement to retain interest of most epic/folk/Pagan metal believers. 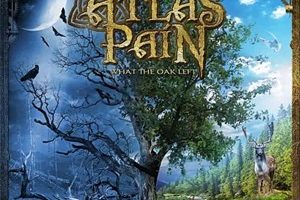