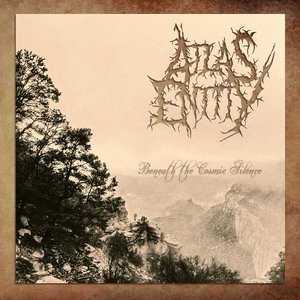 It’s a rare thing to get that ‘woodsy’ metal feeling from a progressive death metal band. The type of thing that makes you recall albums very early in the Opeth discography (say Morningrise), or more recently with bands like Agalloch or even Amiensus. But the attention to detail in Atlas Entity’s songwriting gives it a unique feel in contrast to many other prog death releases of late, and makes it worth seeking out.

A one-man act (Alex Gallegos) with some help from Decrepit Birth drummer Samus Paulicelli, it does draw some comparisons to that more melodic/atmospheric black metal in line-up size. But the result is less easily categorized (besides the simple progressive death metal copout). Tracks range from the more moody and atmospheric, often utilizing acoustic guitar and more introspective passages, to moments of more hulking aggression with more weighty riffs and interlocking melodies. The emphasis is more on the songwriting than just stringing together some ‘cool moments,’ and the sense of flow from these melody-driven segments and bouts of heaviness is fitting and quite natural. Some vague feelings of early Gothenburg come into play on some tracks, both in the sound of the music itself and the types of melodies to be discovered. “Visions of Gold” has a bit of a more blackened early In Flames feel to it, in addition to the already mentioned sources, which give it some added drive in tempo. The two part “In the Shadow of the Mountain” and “Celestial Noise” provide some of the strongest highlights, also bringing in some clean vocals to add in with the bevy of extreme vocal styles, and elaborating the sorrowful vibes with more vibrant yet catchy extremity.

Atlas Entity are on the cusp of something truly special with Beneath the Cosmic Silence. There’s enough heavy death metal moments to draw in that crowd, while providing the melodies and added emotional components to satisfy a wider audience in the extreme scene. Regardless of your take, it’s worth giving Atlas Entity a few moments of your attention to see what they are doing.