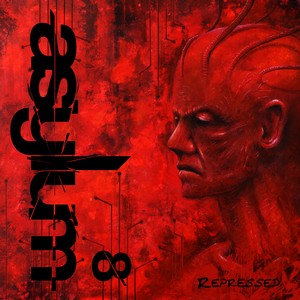 Whether one cares to admit it or not, music in general has been moving into a more electronic state. EDM has already started to make a mark on the more melodic end of the metal spectrum, and with Asylum 8, it attempts to gain a foothold in the more extreme end. Feeling akin to an industrial death metal approach, yet with more bounce, Repressed has some good ideas for the band to expand upon in the future.

Certainly a bit polarizing to the more traditional death metal fans, it’s also clear that this is not the target audience. At points, Asylum 8 create a rather upbeat and catchy atmosphere, as the electronic elements merge with the riffing in a complete, and organic, union. The death metal influences can still be apparent, and provide an oddly enjoyable contrast when blastbeats and jackhammer riffing splice into the mix (see “Thanatophobia”). The groovier death metal riffs don’t lose their thunder in this space (“Deliverance”), instead giving the music some added depth and sets them in more of a unique space. The majority of the album utilizes harsh vocals, but moments of quite melodic clean vocals manage to spruce up the tracks. Both are well-implemented, even if the trade-offs start to become a bit predicable by the end. Despite the modern feel, they don’t shy away from some short solos, which again create an interesting mood atop the more electronic soundscape. The album ends with a David Hasselhoff cover of “True Survivor,” which is an odd choice, but with an sound that’s already a bit eccentric, it works.

While the band is in a space that may find more modern fans off-put by the extreme vocals, or more extreme fans put off by the EDM elements, Repressed is none the less a unique album that should find some appeal with some more open-minded folk. They’ve taken the industrial metal model and amplified it to reflect the sound of the times, and in doing so, found a voice that should provide even more fertile territory ahead.