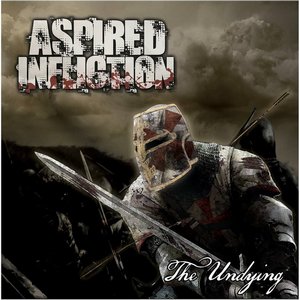 You know the old saying, “You can’t keep a good album down.” Well, perhaps that’s not quite the way that it goes, but Buffalo, NY’s Aspired Infliction began conjuring up what would become The Undying 8 years ago and the day of it’s arrival has finally come. When delays of this magnitude come about, sometimes the product becomes subpar, but certainly not in this instance. For melodic death metal fans, they’d be wise to check it out.

Coming in with an attack that’s rooted in older melodic death metal but still carves out some space for more modern influences (including some groove), Aspired Infliction has a sound that’s easy to get into. The result is often a high-energy approach that pulls the listener in with driving riffs (“Blood on the Battlefield” for instance) with some catchy melodies and just enough slow down/groove to keep the dynamics completely in check. Some cuts hit a faster/heavier vibe, such as “Apathetic Totality,” but again, are balanced by more melodic numbers like “Enemies of Life.” By focusing on the catchy melodies within the more aggressive riffing formula, there’s plenty of time for the music itself to shine. It’s hard to go from one song to another without finding a riff or melody that’s going to stick with the listener over time. This is further enhanced by avoiding the clean vocal clichés that could have developed around an album such as this – a pleasant lack thereof keeps the music going full speed ahead while giving it the power that it needs.

Energetic and catchy, The Undying shines due to it sharing some Gothenburg-esque influences and combining them with some pure American grooves. Those who dig melodic death metal, but want something that can more consistently go for the throat with heaviness (while achieving melodies) will find Aspired Infliction an act worth championing.