As I Lay Dying – The Powerless Rise (Metal Blade Records) 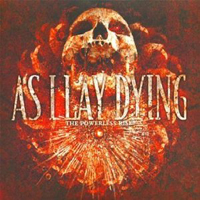 Had this been five years ago, Blistering would have given this album a 5/10 just on the metalcore merit alone. You see, AILD used to bug the you-know-what out of this scribe, as did just about every metal of the core band from 2003 – 2007. It’s not a stretch to say 98% of them are utter shite, but As I Lay Dying aren’t shite; they’re the cream of the crop and at this point, the only band that emerge from that era that is not only remotely tolerable, but quite good at what they do. The Powerless Rise is another notch in their cross-bearing bedpost. Oops. That one slipped.

Little in terms of direction has changed since 2007’s An Ocean Between Us. There is still a distinct thrash thread running through the album, as evidenced by whirlwind mania of “Without Conclusion,” which is probably the best song of the bunch. Give credit to drummer Jordan Mancino, who has emerged as one of metal’s top sticksman – he’s both tasteful and technical, and has a monster groove, just check out “Upside Down Kingdom” in the breakdown portion.

The seismic melodic girth that used to pop up on previous albums has been reduced greatly, allowing for the snapping “Parallels” to take form; same with “The Plague.” In fact, AILD is dare we say, “brutal” in spots, able to hang with some of the current bands parading around as death metal (read: Suicide Silence, Whitechapel, et al). The aforementioned jams back up the claim, just don’t let the totally unnecessary clean vocals of bassist Josh Gilbert soil the thing, as he does on the otherwise excellent “Anger and Apathy.”

Given how popular the band became in such a short period of time, one had to think As I Lay Dying would have gotten increasingly less heavy, but they’ve done the opposite. Where they were once worthy of every stinking metalcore cliché in the book, they’ve outlived that trend and that sound. The Powerless Rise might make some believers out of those who before, wanted nothing to do with this band. And no, that’s not a pot-shot at their religious preference – no one cares about that anymore. Sorry, Jesus.