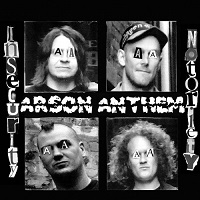 Easy to get this mixed up with Outlaw Order, who are essentially Eyehategod without Jimmy Bower, yet Outlaw Order doesn’t have Phil Anselmo in the ranks like Arson Anthem does. Consider this just a notch above Superjoint Ritual, although the delivery is part and parcel – it’s sloppy, crude, and punk-oriented hardcore. Nothing to go nuts about, but as mentioned before, it tops the mess that was Superjoint Ritual.

Joining Anselmo (who handles all guitar

duties) is Eyehategod singer Mike Williams, bassist Collin Yeo, and drummer Hank Williams III, making this something along the lines of an all-star project. Williams is best suited singing over slow and sludgy material, although his razor-throat appears to be holding up after all of these years. Anselmo (admittedly) is an average guitar player, using nothing more than rehashed punk chords to limited effect.

, there’s little time to hang onto anything, save a quick bass interlude on “Polite Society Blackout” and the frenzied opening of “Hands-Off Approach.” Beyond that, the bulk of these tracks sound like exactly how you’d expect, which is in that terrain right below metal, and in the classic punk/hardcore vein that Anselmo so adores. And frankly, none of these songs will make anyone pine for the classic crossover days of yore.

A man of many projects, it would be easy for Anselmo to stick to just Down, but the man has always had his teeth in many things at once. Problem is, none of them remotely approach the professionalism and execution of Down. A lot of these projects just sound like they were hashed out in the garage and tossed out for just public consumption based on his name alone. Arson Anthem definitely is one of those.