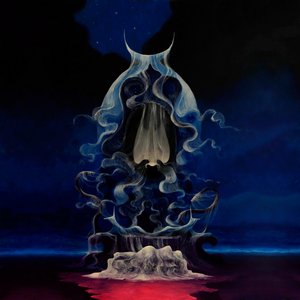 Even with a small army it would be near impossible to cover every album that emerges over the course of a given year in a timely fashion. Better late than never, however, particularly in a case like Lunar Ascension when the album is a very solid entry in the inner darkness/outer truth/Gnosticism/occult-focused realm of black metal so pervasive in 2018.

Unsurprisingly dissonance and speed are key components of the sound on Lunar Ascension (given the album’s cover art and the band’s previous EP, whatever logos the artist seeks is found through our nearest celestial body). Surprisingly they’re matched with extremely lean songwriting and a continual melodic core that sets them apart from other bands chasing similar ends (Nightbringer, Akhlys, and a good portion of I, Voidhanger’s roster).

Additionally and perhaps more importantly, is the band’s willingness to slow down to allow cadence and dynamics to develop around the melodic ideas at play. Title track “Lunar Ascension” begins slowly and takes time to meander through cresting waves much as “Fallen Star’s Light” simmers before erupting into cascading walls of obliteration. There are blastbeat sections aplenty across Lunar Ascension but they’re one component of many rather than being the sole concussive force upon which the album rides.

The longest tracks (that each still come in under six minute mark) are the aforementioned title track and “Chthonic Torches Of Gnosis”, multi-part sagas that do well in capturing the essence of a journey (for the listener no doubt as much as the artist). Though initially somewhat of a cacophonous maelstrom similar to the most recent Ævangelist, Lunar Ascension separates itself quickly through its distinct lack of repetition and a much clearer focus on progressing from idea to idea without lingering in one place for very long.

Lunar Ascension is indicative of I, Voidhanger in general, a label focused on a small spectrum of sound and doing that sound very, very well. A shame too that I didn’t encounter this album closer to its release date as with part of the year to soak in, it would likely resonate even stronger than it does now. This album won’t convert those that don’t care for this area of the black metal spectrum but for those that do there is much to mine and enjoy in Lunar Ascension.