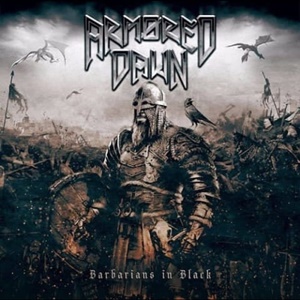 The South American fervor for metal continues with Armored Dawn. Playing shows with Megadeth, Symphony X, and Sabaton among others in support of their 2016 debut album Power of Warrior, the uptick in promotional muscle with AFM should lead to wider international attention for this sophomore outing Barbarians in Black. These ten tracks showcase a confident heavy metal group, accenting large power hooks and crunch plus epic choruses and warrior/battle-laden lyrical themes – intertwining numerous European/Brazilian influences in the process for an explosive and instantly endearing style.

Seeking out Orden Ogan mainman Seeb Levermann for mixing and mastering didn’t seem surprising, as the thick wall of guitars and choir-oriented choruses for “Beware of the Dragon” and “Unbreakable” align with that German bombast and propulsive nature, although the main vocals from Eduardo Parras add a lower register Týr quality to the proceedings. Often the guitar work of Timo Kaarkoski and Tiago De Moura locks into these monster rhythms and builds outward into cultural/epic strains, as “Bloodstone” doesn’t mimic the Judas Priest cut of the same name, instead driving home early 90’s Metallica-like parts with the versatility of Angra/Shaman. Rafael Agostino as a keyboardist sets picturesque landscapes while not dominating the scene – his circular patterns for the heavier “Eyes Behind the Crow” alluring. With over half the songs sprinting in under four-minutes (and none over five), Armored Dawn waste no time getting to the hooks, smartly executing in that back and forth call to arms material that hits at the heart of most traditional and power metal mavens- including an introspective ballad “Sail Away” sure to make audiences sway back and forth.

Barbarians in Black isn’t going to win original accolades for its fist pumping, mid-tempo to slightly faster riffing, and mead hall-oriented choruses – but it’s damn effective, and that’s the bottom line when it comes to this specific sub-genre of epic metal.