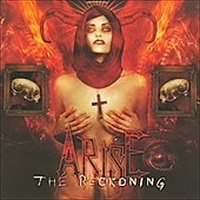 Ah, melodic death metal done right. We’re quickly running out of bands like Arise, who while following the melo-death playbook play-for-play, are equally as competent, if not jarringly memorable. In a nutshell, that’s The Reckoning, the fourth offering from these mid-level Swedish deathsters.

Off the bat, Arise recalls latter-era Callenish Circle, who often were derided for their no-frills, almost robotic take on melo-death, but had more than a few fans here (yup, right here) and abroad. Arise proves to be more agile and more willing to take chances with extremity, just look at opener “Adrenaline Rush” and “The Fury.” The band tries its hardest to stay away from the general riff confines of the style in these jams and elsewhere, like standout “No Memory of Light,” they’re capable of simply pummeling with brazen tremolo picking.

There are a host of quality melodies to be found on The Reckoning, just reference the chorus section of “Reclaiming the Soul” or “They Are Coming For You.” Granted, these are far from the saccharine home-blend that has been coming out of Sweden since the dawn of the decade, but they have a character and loads of grappling ability. Punchy, staunch riffs highlight “Dead Silence,” pairing staccato guitars with Arise’s deadly groove, while closer “End of Days” winds things down with the melodies thrust to the fore.

There was once a time where bands like Arise seemingly fell from the sky. Heck, a lot of us journo’s had to step over bands like this just to find value and worth within the subgenre. Those days appear to be long gone, so kudos to Arise for hanging around and producing one of the more enjoyable melodic death metal albums of the year.