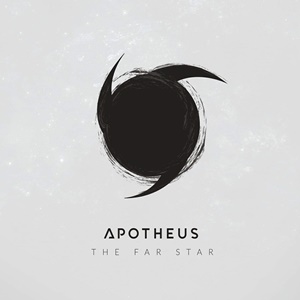 Emerging from Portugal, Apotheus blends progressive and melodic death metal platforms on this sophomore album The Far Star. Forming in 2008, the band released their debut EP A Quest to Remain in 2011, and their first full-length in 2013 with When Hope and Despair Collide. Turn over in the lineup beyond national touring explains the six-year break between records – but the quartet appear to have the ship steered on course, along with a sci-fi/ Isaac Asimov-inspired concept regarding the cosmos and the introspective aspect of human nature.

The opening “Prelude” sequence sets the storyline through a swirling keyboard/ orchestral montage with a narrator putting things into motion – before the natural progressive riffs and atmospheric passages take over for “Caves of Steel”. The vocals of rhythm guitarist Miguel Andrade possess the dual growl/alternative clean melodies, both done very convincingly and riding in unison for the feel of the music on display – brutal when necessary as well as melodic for those parts. The four-piece can shift seamlessly from brutal death/blackened passages to more epic, progressive terrain, a testament to understanding dynamic flow as drummer Albano von Hammer propels in overdrive then tempers his playing with amazing groove-like tempos, “Redshift” an exquisite insight into both aspects. Rounding out many of these songs are atmospheric keyboards to set up the next heavy salvo, Apotheus very keen on allowing the listener to absorb the lyrical and musical content on multiple levels. Scandinavian melodic death from the 90’s a la Dark Tranquility factors in as well as progressive influences that are not necessarily overly technical, keeping the hooks and main riffs manageable to consume and retain.

Although the front half of the record contains shorter material, the band extend their arrangements a bit more for the second half – the eight-minute plus “Under a New Cloudy Sky” featuring slower, dotted guitar notes and a doom start before the space narrative accents and progressive push and pull action takes over, the main chorus/riff super catchy an ideal for incessant headbanging. By the time “A New Beginning” finishes the record in grandiose fashion through its multi-tiered progressive/melodic death/ spacious contrasts that sweep the listener in a rhythmic splendor, you leave satisfied in the aural journey that has taken place. The sparse cover isn’t indicative of the contents from within – maybe the band preferring to let the music do most of the talking.

In the end, The Far Star is a delightful experience that could gain equal affinities from the progressive and melodic death crowds – and that’s all to the benefit of Apotheus as a whole.