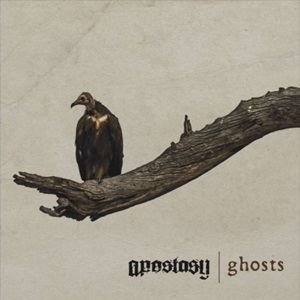 Delivering an explosive metal cocktail since 2002, Apostasy come from New Haven, Connecticut – and one look at their discography through Metal-Archives.com will alert you that they’ve been productive- releasing four live albums, numerous demos, as well as appearing on various compilations. Their first proper full-length An Empire Will Rise came out in 2012, showcasing more of their metalcore roots while hinting at the extreme/groove elements. Now at this juncture, Ghosts has been a well-awaited follow-up – the quintet solid in their proficiency as players, growing as songwriters, and proving that blending together technical thrash with groove and melodic death hooks and nuances makes for quite the satisfying, head banging aural experience.

After the quiet, acoustic-driven “Patient Zero” intro that features a science-oriented narrative about human/mammal classification, the guitar hooks from Brian Maler and John DeAngelo unfurl for “(I Am) The Arsonist’s Flame” in a Scandinavian meets North American context, pushing aggressive tones while also keeping melodic runs and transitions top of mind. When the rhythm section chooses to pick up the pace, you sense an affinity for the tribal punch of early 90’s Sepultura as equally as At The Gates circa the mighty Slaughter of the Soul – on the flip side bassist Will O’Hara and drummer Rob Brown capably executing Unearth-oriented breakdowns during “Architects” without abandoning the musical/riff framework. The complexities in riffs and harmonies plus tempo twists conjure up everything from Arch Enemy and In Flames to the above mentioned acts – but there’s also this underlying sense of groove penetrating the mechanics of Apostasy’s style. Check out “Ghosts of Guyana” and the mid-tempo swinging “Hail the Heretic”, the latter digging deeper into some death metal angst with Ryan Early’s stunted growls, occasional blast beats, and some exciting, arpeggio-laced lead break work.

Speaking of Ryan as a vocalist, he possesses that double threat growl/scream versatility that is remarkably clear while still being bone-chilling in its conviction. One listen to his low rasp for “Lord Impaler” and the bob and weave maneuvers for “Maruta” will bring everything from Johan Hegg of Amon Amarth to the late Chuck Schuldiner of Death to the brain – as the lyrics of violence, rage, and conflict become battle cries of survival, testimonies to become better as people. No one will be disappointed in the lively tones and production values, and for a change this scribe enjoys the simplicity of the lone bird on a branch cover. Hearing much of Ghosts live before delving into the album, Apostasy deserve accolades and respect for persevering for so long. It’s that much more exciting though that this record crushes, destroys, and hopefully elevates the band’s status not just in Connecticut or New England, but on a national and global scale.