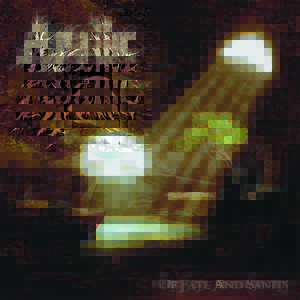 Sometimes ‘progressive’ just seems to be an umbrella that covers too many bases. In the case of Apallic, to these ears there’s nothing here that melodic death metal cannot adequately describe, though one does have to be careful with that one (as Gothenburg conjures up almost immediately and that one doesn’t really work here). But such is the case when a word is in such high demand lately, as progressive seems to be.

If there’s one quick and easy band comparison to associate Apallic with, it’s that of Edge of Sanity. Not the later stuff, but the earlier material that didn’t involve clean vocals – yet Of Fate and Sanity is definitely not copying anybody. There’s more modern nuances to be had within the tracks available, in terms of the approach to riffing structures and melodic sensibility. One thing is for sure, and that is the abundance of heavy-hitting yet memorable riffing. Lots of tempo changes, with tracks like “Deranged” taking full use of some faster turns while leveraging solid mid-tempo runs to keep melodies at the forefront. With the band really pushing the melodies to the forefront, the mid-tempo stuff does work the best at conveying the landscape, but the urgent pushes in tempo and occasional slowdown (and clean guitar) provide a necessary change of scenery. Vocally, intense growls and screams make the bulk of the material, and purists will be pleased at the lack of clean vocals, keeping your attention to the rest of the band for melody (though a sparse number of spoken word passages are present). It’s rounded out by a production that feels modern without being sterile, letting the melodies feel crisp without being dated.

The emphasis on melody ultimately gives Of Fate and Sanity its strength. An effective ratio of the melodic to heavy stuff will keep you engrossed even if the formula is familiar. All in all, an enjoyable debut that lays the groundwork for even stronger things to come.