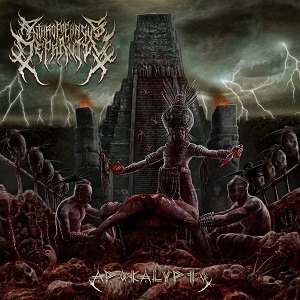 Doesn’t take an expert to figure out what’s going to come out of the speakers when you see the combination of Comatose Music and an Indonesian brutal death metal act – let’s be honest, how many times to you see the word ‘anthropophagus’ used outside of extreme metal territory (and in daily life)? Apocalypto is exactly how you’d expect it to be, but that doesn’t make it any less of a good time!

Anthropophagus Depravity caters to all of the more modern brutal death metal fans. Meaning, they don’t sound like they recorded the album in a basement in the mid 90’s and just went for the knob that says ‘brutal as hell’ and kept it there the whole time. It’s splendidly intense, for sure, but it’s not a total wash when it comes to memorability. Despite the gurgles, despite the vehemently blasting drumkit, and the ‘wall of sound’ guitarwork aggression, there’s something more to Apocalypto. Admittedly, there’s a little bit of the usual ‘blur’ but the band switches enough between the grooves and speed runs that it keeps momentum, and the stronger production does indeed help alleviate some of those usual symptoms. They feed off of that heavy crunch, notably at the groovier tempos (see “Temple of Sacrifice”) and that palpable tension that’s built helps them to go into the faster stuff with more ease. There’s even some bass that’s noticeable as well from time to time – all little tweaks and adjustments that keep the album more interesting and varied.

Apocalypto is massively heavy and just as brutal as the next band, but due to some polishing of the usual extreme edges, Anthropophagus Depravity brings forward something that feels a bit more refreshing and intriguing. It’s no reinvention of the formula, but it’s certainly proof that a good buffing to the usual components can leave an album sounding a bit more impressive than what many in this genre tend to offer.