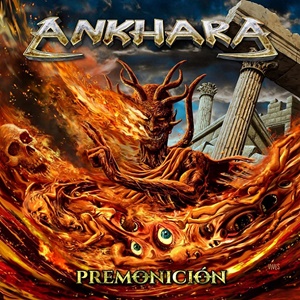 Back for a second go around after disbanding in 2004, Ankhara hails from Spain and live within a traditional power metal spectrum for this fifth studio record Premonición. Four-fifths of the lineup continues from those early days, with drummer Matias de Vallejo climbing aboard prior to 2018’s Sinergia effort. They’ve appeared on tribute records from local/international legends like Baron Rojo and Iron Maiden – so it’s a safe bet that you can tell through these ten tracks where the bulk of influences as well as performance and songwriting aspects develop.

The twin guitar attack along with multi-octave vocals and a steady supply of slamming rhythm section work (double kick ethics very apparent) give the band a template for high energy power meets mid-tempo anthems that fluctuate from song to song. At one moment you can hear an Accept/Judas Priest like swagger for “Esperando En La Eternidad” but then the twin harmony axe play commands full focus for the follow-up “Levantar Mi Alma”. Many songs contain those killer hooks and main riffs/choruses tailor made for audiences to jump, clap, stomp or singalong – most will find the stop/start crunch and syncopation between all instrumentalists divine for “Otra Vez” – as guitarists Cecilio Sanchez Robles and Alberto Martin effortlessly display skills that mirror a lot of heroes from Iron Maiden to Helloween. The Spanish sung lyrics may limit the appeal to some, but it’s very evident that Pachó Brea as a singer possesses plenty of lung capacity to hit those upper notes, while his midrange has a bit of a Minoru Niihara (Loudness) quality. Beyond the expected skull/devil/fire-oriented cover art, the only minor beef lies in the digital tones for certain production aspects that could have made some of the snare hits much sharper instead of the sprinkler/wet noodle ambiance present.

Those who love energetic power metal with plenty of guitar harmonies, superior high octane singing, as well as driving rhythm section mechanics holding down that fort will delight in Ankhara and their presentation/performances here.