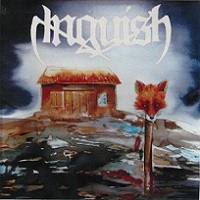 A bit surprised that no one has ripped-off Candlemass as much as they should. Granted, such a crime would essentially be ripping off Sabbath in a roundabout way, but the Swedes always had their way of taking doom-trolling riffs at their most simplistic and making them epic. Nevertheless, the Candlemass template isn’t a hard one to copy, as Sweden’s Anguish proves on their debut full-length, Through the Archdemons Head. The only thing missing is Messiah Marcolin’s pleas for some doom dancing

With a production and feel yanked right out of Nightfall and the vastly underrated Tales of Creation, Anguish are certainly adept at making one feel they’re in a doom time-warp. The main differentiator between Anguish and their heroes is vocalist J. Dee, who goes for a more Tom G. Warrior-styled grunt as opposed to the theatrical vocal ping of Marcolin. Dee is probably the biggest sticking point on the album’s eight tracks, as his vocals come across as rather ill-fitting, thus taking down the band’s CMass riff worship down a few pegs. If Anguish had an actual singer

, they’d be in a lot better shape.

In spite of the fact that most of the album is about as literal of an interpretation of Candlemass as one can get, there are some striking doom moments. The lurch of “Book

of Fox” and “Dawn of Doom” cast a merciless spell, while “Illusive Damnation” digs in with some chunky riffing that in a rare instance, works well with Dee’s vocal splatter. Beyond that, one would safely assume a lot of riffs were discarded from the vaults of Leif Edling. In fact, we wouldn’t be surprised if given the chance, Anguish would crawl through Edling’s dumpster for some thrown-away ideas. Doom on, eh?