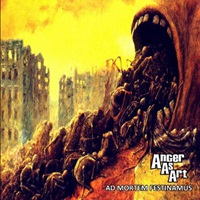 Active for over a decade, this quartet of musicians contains deep ties to the development of speed/thrash metal in its infancy. Especially if names like Abattoir and Evil Dead crop up in your record collections. Anger as Art keep the aggression alive through their fifth album Ad Mortem Festinamus – delivering a raw, abrasive form of thrash that relies on channeling much of their youthful spirit into proper, cohesive arrangements.

A venomous philosophy does wonders for these 10 tracks in the main- excluding the set up title intro at 1:49- because material like “Pissing on Your Grave” and “LA State of Mind” (you wonder if this is the antithesis to Alicia Keys and Jay Z’s “New York” song) goes full throttle on all fronts, Steve Gaines’ raspy roar and fierce word spew a call to arms while the riffing and tempos equally tickle that stand at attention mechanism to move bodies in circular/ stage diving fashion at shows. Gaines also doubles on guitar with Danny Oliverio, often teaming up for some killer twin harmonic action that can be very Maiden-esque in nature for “Hammer, Blade, and Twisting Fire”. The band mix up conventional quick hitters with a few extended six-minute plus songs, where the tradeoffs and instrumental abilities shine – “We Hurry into Death” featuring a lot of back and forth lead breaks and thunderous drum fills from Rob Alaniz.

The only misstep appears on the subtler “Praise of the Firehead”, where the band choose to employ acoustic guitars near the beginning and a more epic/folk-like march template as the heavier parts kick in – as Steve’s clean verses while passionate appear a bit out of key in comparison to his normal angst riding roar. Anger as Art also benefit from a very driven tone and production, where you won’t feel drowned in computer manipulation or punched in sounds – this scribe suspects that connects with the overall ‘what you hear is what you’ll get’ theme of everything involved in the group.

Purity should be applauded – Ad Mortem Festinamus is explosive, vicious, and everything that long-time thrash maniacs desire from Anger as Art. 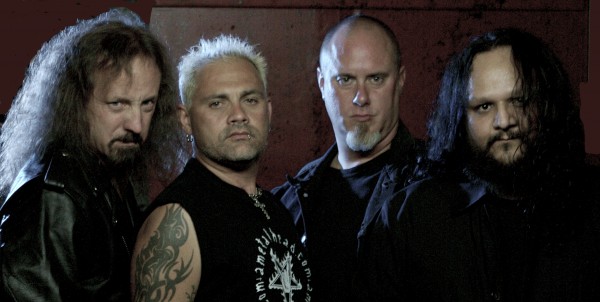