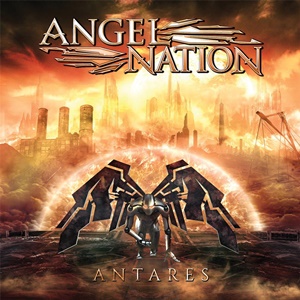 If there is one genre experiencing steady growth across the globe, it must be any offshoot of symphonic metal. The ability of musicians to incorporate heavier, darker, lighter, and atmospheric shades twists the formula around – opening creative visions like never before. Angel Nation established themselves as a well-rounded act through their second full-length Aeon back in 2017 – featuring singer/keyboardist Elina Siirala, who would double her workload becoming a part of Leaves’ Eyes. So its understandable given the recording/touring schedule of that veteran outfit that Antares took a little longer than anticipated to hit the market, and the results are compelling.

The record combines catchy melodic tracks full of heavy riffs and proper keyboard lines, plus vocals that switch between conventional rock and operatic angles. One moment you can experience a grand chord progression and uplifting chorus ready for stadium-level support with “End of Innocence” and the next lush orchestration, darker/stunted heavy riffs, and adventurous rhythm section action for “Life Is a War”. Elina as a singer knows when to belt out those operatic notes during “Where’s the Time”, a sultry effort that has a killer guitar/drum underpinning, and then be calm, restrained, and thoughtful during the somber “Way Back Home”. Modern/EDM aspects give chase to a chunky guitar tone and almost “Pull Me Under”-oriented segment for opener “Seraph” – proving Angel Nation belong in the symphonic metal style through an equal balance of both aspects to their sound. Combining cryptic texts, true life stories, and a concept around the army of angels (Seraphim), the album moves along quickly and efficient in a tidy 41-minute window. You also get some endearing circular guitar parts that harken back to 70’s/80’s arena-filled days, check out “Face to Face with the Merciless” in that regard with fists held high, stomping to the beat.

Antares contains the right mix of symphonic metal base elements, melodies, hooks, and diversity to garner more than enough attention not just from the ardent followers of this genre, but hopefully gain new outside members to the fold.