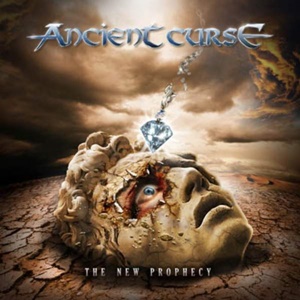 Founded in 1985, Ancient Curse return for their third full-length in The New Prophecy, more than two decades removed from their last effort Thirsty Fields. Although there isn’t much explanation in my research for the downtime, guitarist/vocalist Pepe Pierez spent some time in Poverty’s No Crime and Sons of Seasons during the late 2000’s and early 2010’s. Nevertheless, the quartet possess an interesting mix of progressive, power, and speed/thrash influences that they spread out in these nine tracks – providing plenty of twists, turns, and entertaining tricks over the almost hour-long playback.

As guitarists Pepe and Gunnar Erxleben display grace and finesse through their intricate runs, exemplary lead break ethics, and standard clean to rhythm duties. There’s a deadlier edge to songs like “Men of the Storm” and “Forever Young” that find these musicians explore aspects of Nevermore and Symphony X while also adding in many of their Teutonic charms. Classical acoustic touches float in and out as well, the keyboard/orchestration adding deeper sophistication as Kamelot keyboardist appears in a special guest spot. The vocal melodies and harmonies reach arena rock/AOR-ish proportions, Pepe handling his voice eloquently and chameleon-like throughout a more straightforward, shorter outing like the 4:09 “The Shadow” while handling the stairstep time signature changes for the prog/power tour de force “One Moment of Fortune” in multiple talking/whispering to multi-octave registers. The only blemish on the record appears for the “Mind Chaos” ballad, a six-minute plus effort with engaging enough guitar parts and hooks, but the main verses failed to captivate and elevate the proceedings to that next level dynamic outing. At least the record ends on an uplifting, galloping note for the title track – crisp interplay from all parties should elevate this track to prominence in the Ancient Curse live arsenal.

Seasoning with other acts brings The New Prophecy to the forefront of a power/progressive metal movement usually long forgotten. The marriage of strong hooks, heaviness, solid mechanics and distinct songwriting could bring Ancient Curse a multi-generational audience.