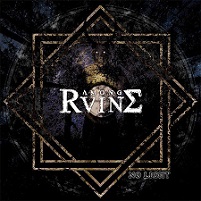 Signed to One Man Army Records, a fitting title for its owner, current Wolfheart leader Tuomas Saukkonen, Greece’s AmongRuins are somewhat of a no-man’s-land band. While tagged as melodic death metal, their melodies don’t exactly carry the same weight (or saccharine twist) as the style’s forerunners. Furthermore, Saukkonen gave the album such a drum-heavy production job that sticksman Lithras (real name: George Tzitzifas) becomes the shining across the 12 songs that comprise of the band’s second full-length, No Light. These Greek bands…never quite know what to make of ’em.

Anyway, since there’s no much finesse to AmongRuins’ sound, you’re left to work with the pushy, thrash-ready angle of cuts like opener “Sear Sacrifice,” and “Beneath the Waves,” the latter of which a regular dose of near-melodies. Some classical guitar picking works its way into “Intensity,” serving as not coincidentally, the album’s most diverse cut. But for the most part, No Light is a heads-down, somewhat grueling affair, with the domineering drumming of Lithras really taking over just about…everything. (Note: This is probably more of a product of the mix job than anything else, although it does help the man is more than competent behind the kit.)

Greek metal, as we’ve come to learn, often provides a very wide slate of bands. And since the country is without it’s own designed sound tied to a certain territory (see: Gothenburg, Stockholm, et al), bands like AmongRuins are bound to sprout up, who, take off the exotic edge that’s found in most Greek metal. Therefore, if ‘yer looking to bottle what is undeniably a straightforward, sub-melodic death metal release, then here you go with No Light.