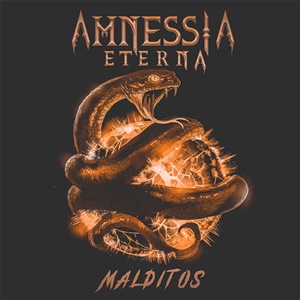 Even in old tried and true genres, sometimes less is more to get to the point of idea execution. Such is the case for Amnessia Eterna, a Chilean act who on this album Malditos live for the purity and aggressive spirit of thrash. You’ll get eleven slices of crunchy riffs, stop/start mechanics, an ample amount of groove amidst the faster or mid-tempo cuts, and barking/commanding vocals with just the right gang-like chorus/background support to drive home specific melodies.

These gentlemen study and execute from a platform of early American and European heroes like Metallica, Megadeth, Exodus, Iced Earth and Destruction. You can expect ripping lead breaks that contain the right wah-wah pedal enhancement, shredding to the brink on “Desquiciado” and then delivering thoughtful, reflective acoustic guitar tastiness during the instrumental follow-up “Desvanecidos”. You feel like you are taking a trip back into 1984-86 with many of the circular rhythms and barking vocals for “Infierno”, while the clean guitar passages and progressive bass mechanics during “Tan Solo” showcase a softer side for Amnessia Eterna, possibly exposing the limitations of the vocals though as the clean, lower register of guitarist Camilo Sanchez has a weakened spirit compared to the music behind this song. Twin harmonies and tight, focused arrangements allow the band’s style to become addictive immediately – and the Spanish language content matches the intensity and versatility on display. The snake adorned cover has the same venomous, biting appeal as one would expect when pressing play on this record – as certain segments of the record contain the ideal crunch/stomp aspects to promote circular pit propulsion.

Originality is still an aspect Amnessia Eterna is seeking – but you can’t fault them in terms of execution and talent for this set of material. Those who love a mix of solid guitar melodies, headbanging rhythms, as well as flexible mid-tempo to slightly faster drumming with plenty of groove and exciting fills should find Malditos impressive.