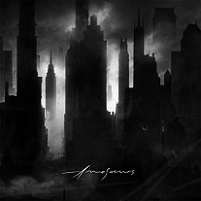 Anyone bowled over by the blissful serenity of Alcest’s Souvenirs D’un Autre Monde will no doubt be charmed by Amesoeurs. The “other” project for Alcest mainman Niege, Amesoeurs are a revealing cross-section of most things pertaining to black metal, shoe-gaze, and indie rock

. And while such a concoction might initially be too much of a hanging curveball for some, it’s not a reach to say that on their self-titled full-length debut, Amesoeurs have hit one into the stratosphere.

Sung entirely in French, Amesoeurs either benefits or suffers from female vocalist Si Je T’s J-Rock tinged delivery. In certain spots, like “La Reine Traveuse,” she fits nicely over top jangly, loose chords, yet on “Heurt,” she sounds out of place, suggesting that Niege’s black metal rasp would have been a better choice. Nevertheless, its unique touch that Je T gives Amesoeurs, even if you’re French is non-existent.

front, this is all over the map. Niege and co. rely heavily on the melodic chord movements made so monumental on the last Alcest, exploiting them the opening instrumental “Gas In Veins” and dark-as-a-dungeon “Receillement.” The proliferation of dance drum beats (no joke) on songs like “Amesoeurs” and “Faux Semblants” are very much a welcome surprise…not sure why, other than they’re infectious, adding something of haunting 80’s dance-pop vibe to the mix.

Off-hand, we can count a handful of moments on Amesoeurs that will make the hair on one’s neck stand up. Whether it’s melodic BM charge of “Heurt,” the beautiful chords at the back end of “Faux Semblants,” the dreamy strands of “Au Crepuscule De Nos Reves,” or dance pop genius of “Amesoeurs,” it all adds up to a sure-fire Album of the Year

Proof that are still no bounds to what can be done in metal, Amesoeurs is feel-good, emotionally gratifying music. And while such statements are typically reserved for other forms of music, this is simply too good of an album to undersell.