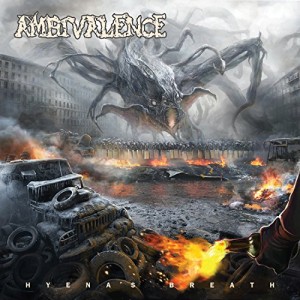 As silly and simplistic as it may sound, often brutal death metal is all about the riffs. There’s no point in trying to out-brutal the next band around (though it doesn’t stop plenty from trying), and quite often the best thing a band can do is to avoid direct emulation and come up with the best dosage of heavy riffs that they can. Hyena’s Breath, the fourth album of Ambivalence, succeeds largely due to this principle.

Following the ideology of hit hard, hit fast, and get out, the 26-minutes of Hyena’s Breath hit the death metal sweet spot. You can toss around different terms for the band’s sound, from brutal death to tech to beyond, but in the end, it’s no-frills modern death metal that never shies away from intensity, though never compromising the melodies that keep it interesting. Ambivalence are at their best when they stick to the mid-tempo pacing, allowing them to focus on riffs that are sure to break out a stomp or two, but are equally catchy in tone. One of the best examples of this is “Simulacrums,” which features some of the best, groovy riffs on the album and also some solid moments of atmospheric melodies to bring some variety. “Thursday Massacre” also shines in this area, with a short but sweet melodic lead to offset some slower, crawling riffs. Of course, there’s some speed-ups here and there for diversity’s sake, and the band proves just as capable to let go of the reins on tracks like “Size Does Matter.”

Consistent from start to finish and never at a lack of groove, Ambivalence continues to strive forward with their spin on modern death metal. It’s a quick blast that doesn’t lose any intensity and will leave you ready to do it all again when it’s over.