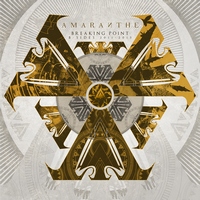 After cranking out three albums since 2011, we come to the first stop-gap release by Amaranthe. As we move further away from last year’s Massive Addictive, the band seems intent on conquering North America on the touring front. Breaking Point seems a perfect way for them to stay out on the road a little bit longer before writing the inevitable follow-up.

Most of Breaking Point consists of acoustic versions of a few songs from their three albums. “Hunger” and “Amaranthine” from the self-titled debut, “Afterlife” and “Burn with Me” from The Nexus, and “Trinity” and “True” from Massive Addictive. The acoustic versions don’t exactly trump the originals, but they offer a refreshing take on the tracks for when one is in a more reflective mood (“Afterlife” is a particular strong point though). The other two songs, “Breaking Point” and “Splinter in my Soul” were recorded around the same time as the self-titled and cover the same ground as the rest of the album tracks from that period, with the title track having a nice, galloping pace to it and “Splinter” veering more in the melodic direction.

All of the tracks have been previously released through various singles through the years, but it’s nice to see them get a place to call home (even with the easy access to these tracks through options such as Spotify). Not exactly the type of album to convince newcomers, but for the obsessive fans that want to have album quality versions of each track, Breaking Point was made with you in mind.