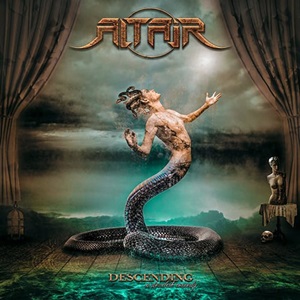 Feels like concept records are the norm rather than the rarity in power/progressive metal these days. Together since 2008, Altair present Descending: A Devilish Comedy – their second album that tells the story of the circles of hell, the dark side of humanity all played out over a theatrical comedy platform. The sextet has had four years to solidify their lineup between records – a sound that is crisp and power-packed, while also exuding the right heaviness and progressive parts to encourage deeper listens and affinities.

It’s obvious that Altair enjoy pushing the double bass BPM barometer, while also striding valiantly into shredding lead play between guitarist Albert Marshall and keyboardist Enrico Ditta. The neoclassical flairs and heads down, aggressive interplay/transitions certainly bring Symphony X to the forefront (“Seed of Violence” the clearest example), while other power riffs have a Teutonic edge to them a la Helloween or Gamma Ray. Whispered, breathy verses for “Seven” open bass heroic avenues and the multi-layered melodies of vocalist Simone Mala – who can go from Russell Allen grit to soaring Kiske/Kotipelto-like falsettos, a serious weapon to pull out for diversity. Synchronized keyboard/guitar harmonization appears to be a hallmark for Altair, almost a throwback to the 1990’s when virtuosity and stunning riff combinations mattered. Keeping the crux of the material at a swift four to six-minute clip ensures quicker hook retention, as well as multiple return engagements due to the relatively short 41- minute recording (why max out the CD if you don’t have to, right?).

The only mysterious aspect appears on the album cover. Half-snake, half-human, the mermaid-like qualities against the grey-ish, cloud filled imagery certainly give the viewer room for thought – it just doesn’t appear as adventurous or as expressive as the contents within. Another Italian band who synthesize American progressive metal and European power to create something engaging on a cerebral and aural plane – Altair will slot nicely for those disappointed in the current lack of new Symphony X material these days.