Wednesday, 3rd May 2017 By Katarina McGinn 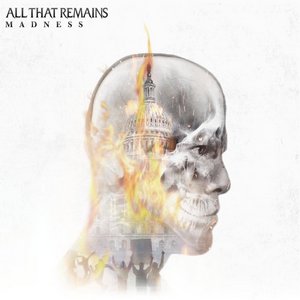 There was a time in All That Remains’ career where it seemed like the sky was the limit. They were outlasting their metalcore breathren (even including top dogs Killswitch Engage during their later Howard Jones years) and seemed to have a good handle on how to balance rock melody with their established core, even as far as A War You Cannot Win. All of that seemed to dissipate on their last release, The Order of Things, and Madness only serves to continue the downward spiral.

Starting off on the wrong foot with the forced heaviness and far too predictable breakdowns of “Safe House,” it only serves as a mediocre reminder of what the band was capable of with more energetic and graceful cuts like “Relinquish” or “Six.” “Open Grave” and “Trust and Believe” also feel lackluster and lacking gusto, the latter does possess a catchy guitar melody but it’s frequently overtaken by Phil Labonte’s overly processed vocals. But if the heavy angle isn’t working for the band at this point, what direction can they go in? The band spends much of the rest of the album trying to discover this for themselves, jumping from alt-rock leanings of “Nothing I Can Do” to the hokey and occasionally cringe-inducing ballad of “If I’m Honest” (for what it’s worth, the other similar track “Rivercity” feels much more genuine and in the band’s wheelhouse) and the more aggro, Five Finger Death Punch-esque title-track and awkward lyrics of “Louder.” For those who stick it out, there’s the “ballsy” cover of Garth Brooks’ “The Thunder Rolls,” which feels so tepid and uninspired that it’s like the band felt it would help shift units based on the idea of it alone.

Some may praise the band for their “diverse” offering, but it more feels like they are stuck, spinning their wheels without the confidence to be themselves that they once had, opting to throw multiple objects to the wall and see what sticks. A pale shadow of their former selves, All That Remains circle ever-closer to the radio-rock drain as long-time fans wonder what might have been had they stuck to their guns.