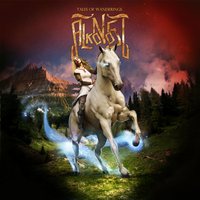 Always impressive to discover a band that has been hard at work for twenty years that hasn’t popped up into your radar. Such is the case with Russian folk metallers Alkonost, for which Tales of Wanderings is a re-made English version of their 2013 release Сказки Странствий. Equally impressive is that it’s not just “redone” with English lyrics, but completely reworked and rearranged, and features the band’s new vocalist Ksenia Pobuzhankaya.

Tales of Wandering sticks with what works for the folk metal format. Plenty of upbeat and melodic riffs to sink your teeth into, and the keyboards keep things suitably epic. The band doesn’t use any “traditional” (read: non-metal) instruments per say, and this allows the riffs to stand out a bit more from some other bands of the type, and ensures that you are going to get your metallic needs met as well as the folky ones. One needs only to look at the opening track, “The Sword of Fate” to know that there is such as much focus on making sure the riffs are killer as there is in keeping the feel more epic/upbeat. Things never get too “dance-driven” and keeps the music more grounded. The vocals are of the harsh variety, which are mostly your standard, but the female vocals switch between more soprano-type vocals and traditionally sung vocals. Both of which are appropriately used in terms of their placement, and have the requisite power to give the music a more delicate or powerful feel if needed.

Solid riffing that successfully melds more folk with melodic death and a nice vocal variety make Tales of Wanderings a success. All of the clear TLC that went into making this album more than a simple remaster shows that this is a band that wants to gain some traction and a wider audience, which hopefully they shall.