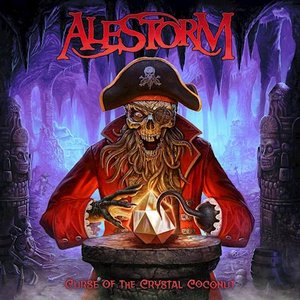 A strong opening with “Treasure Chest Party Quest” sets the stage, with an addictive chorus and jolly riffing to dive into. Successive cuts “Fannybaws” and “Chomp Chomp” nail a consistently upbeat and folk-enhanced feeling, with the latter pulling off some solid grooves on the heavier end of the spectrum as Bowes tells a vicious yet jovial tale about alligators. The end of the track augments the heaviness with some shouted vocals, something that has aided the band in more recent outings to shake things up. “Tortuga” is a bouncier number, complete with some guest rapping vocals from Captain Yarrface, and it works remarkably well in the long run. It’s a nice change of pace and one of the more straight-up catchy numbers on the album. Later, the one-two combo of the punky and upbeat energy of “Shit Boat (No Fans)” and “Pirate Metal Drinking Crew” bring the fun in a major way. Decidedly juvenile in the best way and completely hit the mark; both are sure to be some live fan favorites. On the more epic side of things, the sequel to “Wooden Leg,” named “Wooden Leg Part 2 (The Woodening)” carries a more serious tone (despite some chiptune infusion), with some wonderfully silly lyrics and is sure to please those who enjoy it when the band goes all in on an 8-minute banger, complete with a wicked solo.

There’s a lot of personality to the Curse of the Crystal Coconut. They have become increasingly confident in doing exactly what they want to do, whether it’s some poppy trimmings or a bit of rap. The tracks have their own flavor, while mostly sticking to the playful and fun side of the metal spectrum. At the end of the day, Alestorm provide a boatload of fun that will surely satisfy fans and anyone who wants to let loose a little bit at the end of the day.