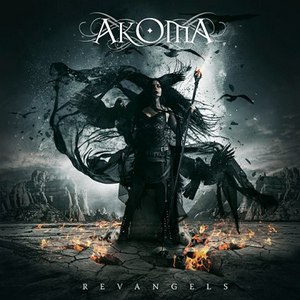 At the surface and sheer selling point level, Revangels seems to have a lot of stuff going for it. There’s a song that features ex-Leaves’ Eyes vocalist Liv Kristine, a recording/production by Alexander Krull at Mastersound Entertainment, and some artwork that seemed a bit darker than what the usual symphonic metal crowd seems to gravitate towards. Alas, high hopes seemed to be dashed while listening to Revangels.

There’s a certain familiarity that echoes through the speakers while Revangels is playing. No one expects an original every single time nowadays, but nothing seems to push the album past the “passable” state. While the first two selling points (Kristine’s appearance, and a quality production) ring true, the album itself just never takes off. The riffs lack the energy and enthusiasm necessary to convince the listener to hit the repeat button. The symphonic elements have their place in a band like this, but much of the riffing just feels non-descript and simply there to add volume (see “Change of Propensity”). Unfortunately, if the music was stripped to just the guitar/bass, one would have a hard time recalling a particular track (the more punchy riffing of “Hand of Greed” may be the one exception). Vocally, Tonya Bell hits a nasally overtone that ends up grating the nerves more than inspiring, particularly on the ballad-esque “Humanity,” in which the vocals are much more front-and-center. In the more layered sections, it is less pronounced, but it’s inescapable throughout the album as a whole.

One can’t accuse Revangels of being a rush job, as this is the first official full-length from the act, who started out in 2004. However, the lack of distinct and energetic riffs coupled with the vocal performance seems to say that it needs some more cooking time. Akoma need to focus on making something more distinct if they want to make a name for themselves in the genre.