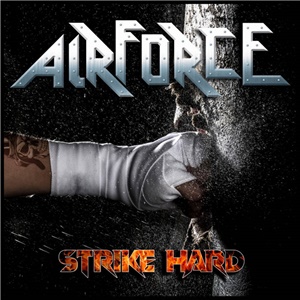 Originally active in the late 80’s, Airforce are an old school metal act from the UK with ex-Iron Maiden drummer Doug Sampson in their ranks. Resurrecting themselves after a seven-year break in the early 2000’s, Strike Hard is the quartet’s second full-length since that reunion. Gaining a Portuguese singer in Flávio Lino last year, the main lineup also contains long-time recruits Tony Hatton on bass and Chop Pitman on guitar. Continuing to throw down some traditional metal hooks and soaring melodies, Airforce embraces who they are as a heads down, anthem-oriented band that sticks to the roots of the scene and what they know well.

Preferring to keep the proceedings basic often allows Flávio the chance to execute his multi-octave soaring abilities to the ends of the earth – much in a way that Bruce Dickinson or Geoff Tate hit their key heights in the 1980’s. Theatrical and confident, his work during the mid-tempo “Son of the Damned” especially through the slightly progressive transition twist or the Accept-esque “Band of Brothers” captures the lion’s share of aural attention. Chop comes from a more emotive, blues-based approach when it comes to building his riffs and lead breaks – nothing super fancy, but adequate in getting the job done as “Finest Hour” best illustrates through its upfront prime guitar melody and thoughtful, engaging short instrumental spotlight. You can picture the synchronized headbanging activities for highlight “Don’t Look In Your Eyes” – featuring a guest appearance from ex-Iron Maiden singer Paul Di’Anno, while another guest appearance takes shape from current Vision Divine singer Ivan Giannini (who used to be in Airforce). If you buy the CD version of Strike Hard, you get the band’s cover of the Sensational Alex Harvey Band track “Faith Healer” – taken a bit more metal during the verses but still psychedelic in spots with some ripping guitar parts courtesy of guest axe man Zal Cleminson from SAHB.

Airforce won’t exactly register energetic enlightenment for most of the metal consumers who prefer speedier acts like Enforcer or Skull Fist these days. But those who love most NWOBHM-sounding acts may find a soft spot in their heart for Airforce.